For being so close to suburbia, this hike has a ‘far away land’ feel to it, and I’ll go so far as to say that, at times, it feels like being in a National Park.

Mount San Antonio, aka Mount Baldy, is known for many things, one of them being the highest peak in the San Gabriel Mountains. With an elevation of 10,064 feet, and elevation gain of about 3,900 feet in an 11-mile out and back hike, this mountain makes for no easy summit. Given these facts, it’s easy to see why Mount Baldy is number three on the Six-Pack of Peaks Challenge list. The ‘challenge’ is an annual opportunity to summit six of the highest and most prominent peaks in Southern California. Jeff Hester, who runs the website, SoCalHiker, hosts this challenge each year. SoCalHiker is also a major contributor in the annual Mount Baldy Climb For Heroes event. Climb For Heroes is an event hosted by the Heroes Project, a charity that raises money for our US military veterans. 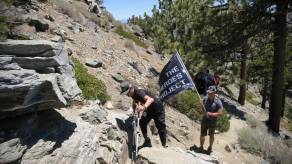 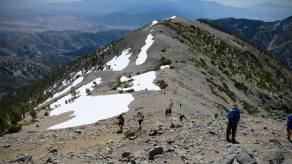 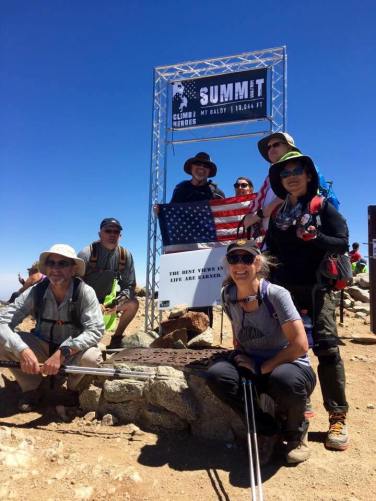 Up until last Sunday (5/21), Peak #1, aka Mount Wilson, has been the only peak I’ve bagged for the Six-Pack of Peaks Challenge. Cucamonga Peak would have been next in line, but we decided to put Peak #2 on the shelf for now, and move on to Peak #3, aka Mount Baldy. The main reason for this was due to the fact that the Climb For Heroes event was happening this past Sunday. And if we were gonna do Baldy, we wanted to do it in a special way, and special it was! So many great people. The enthusiasm, the spirit….the patriotism. It left an impression on me that I won’t soon forget. And we couldn’t have had better weather to hike in. The views and scenery were amazing! 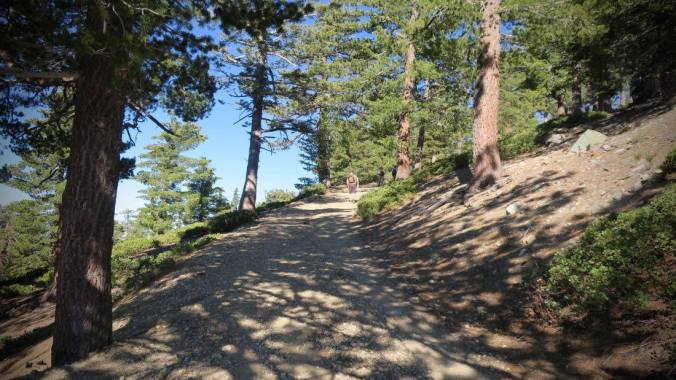 Heading up from ‘The Notch’ to the Devil’s Backbone TrailOld Baldy was pure magic. I now understand why so many people love to hike here, and certain others are making hundreds upon hundreds of repeated summits of this mountain. For being so close to suburbia, this hike has a ‘far away land’ feel to it, and I’ll go so far as to say that, at times, it feels like being in a National Park. It’s beautiful! That said, these experiences require some work to achieve. With almost 3,900 feet of gain in a 5.5 mile ascent, this hike really put my hiking strength and endurance to the test. It was really nice to see all the motivational signs along the route. Especially the one you come up on as you are about to summit this puppy. 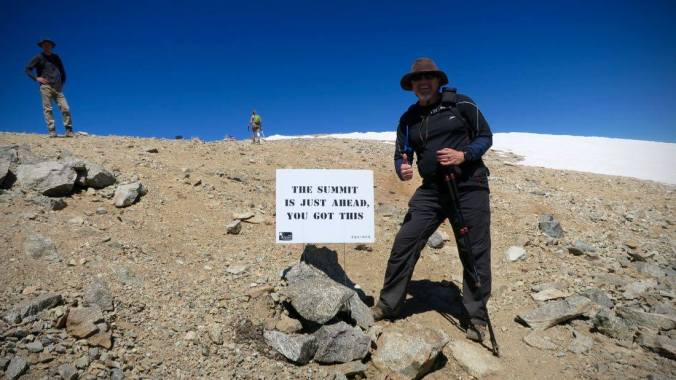 The last motivational sign before reaching the summit.The first segment of the Devil’s Backbone trail reminds me a lot of the last half mile of Angel’s Landing in Zion National Park. The big difference being there are no chains to hold on to here and, at least for me, I didn’t think they would be necessary. I can definitely see how this part of the hike would be much more dangerous when there’s snow. Salute to those of you who brave this during the snow season, and live to have a beer after it’s all over. 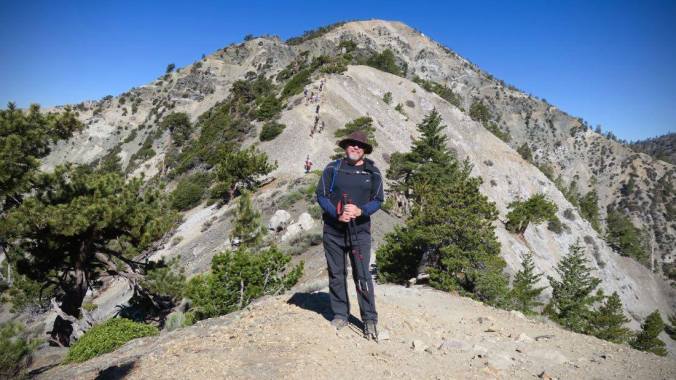 Getting ready to head up the infamous Devil’s Backbone.Part of what makes this hike such a challenge has to do with the ‘lazy miles’ on this route. There are some long segments on this hike that are kind of casual, with not a lot of gain. So guess what? That gain gets pushed on to the remaining miles of the hike, and sometimes it feels like you’re doing 1,000 feet of gain in a single mile! And with the higher altitude, that also adds to the challenge of this hike. I hope to do the Baldy Bowl / Ski Hut route some day, but for now I’ll be content with the simple fact that I made it to the top just the same. Not having done Ski Hut, I definitely don’t feel that the ‘Notch route’ is a shortcut or ‘easy way’ to summit Mount San Antonio. It’s a Rite of Passage, as they say, now matter how you summit this peak. Below are the hiking stats. 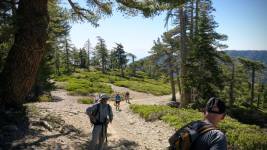 Trail Conditions
You get it all on this hike. Nice, wide fire road that gets a bit rocky at times. Single track shortly after you leave The Notch and also on the Devil’s Backbone. Some patches of snow as you near the summit, but none of the snow is actually on the trail. There were also plenty of signs and cones to keep you from veering off course as well, and also several camps to stop at, which included a first aid station. There were also a few staff members positioned on some of the more ‘dangerous’ parts, like the Devil’s Backbone. I’m sure it would be a lot different on any other day without all that, but I don’t think this hike would be hard to navigate through anyway.

Flying the our US Flag on the Mount Baldy Summit!

One thought on “Mount Baldy and The Climb For Heroes 2017”